The Fabergé imperial eggs are some of the world’s great treasures; how do you display them safely?

The Fabergé imperial eggs belong in a short list of the world’s great treasures. They represent the pinnacle of goldsmithing and the related trades. Their stories are surrounded by intrigue and history, Anastasia and the revolution, and a classic scrap-heap rescue. How do you display one of these priceless objects safely? For the BJU Museum & Gallery’s Rublev to Fabergé exhibition, I was given the task of designing a case to hold the centerpiece of the exhibition, the 1915 Red Cross with Triptych Egg, on loan from the Cleveland Museum of Art. The case had to meet the most stringent requirements of safety for both environmental and criminal concerns. 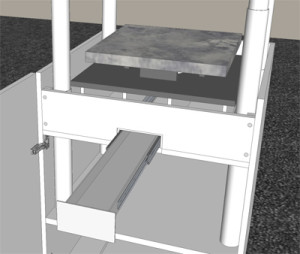 I needed to meet exacting climate control requirements, including an air exchange rate of ProSorb buffer cassettes. I needed to eliminate or protect against pollution elements; this meant selecting inert construction materials that would not outgas or cause other problems. I used Scavengel, a pollution control sheet, to scrub the atmosphere for additional pollutants. Perhaps the most interesting challenge was an extraordinary level of protection required for the object during installation and removal, specifically including a restriction to not have the vitrine lifted on and off the object. Making a door out of one side of the glass was a simple solution, but we could not control the air exchange rate tightly enough. I finally settled on the use of linear actuators to lift the vitrine vertically. This solution also gave us substantial security features, as noted below.

I designed the case with numerous layers of security features; getting past one layer only led you to another. The case had no visible locking or hinging mechanisms. Internally the case was broken apart into sections, with no section allowing direct access to another; for example, the humidity buffer cassettes could be changed using the drawer shown in the illustration above without giving access to the case contents. Sensors included accelerometers, vibration sensors, and volumetric sensors. The vitrine itself was constructed of low-iron Guardian Armour-G laminated security glass. The vitrine was lifted with Linak lifting columns, which also functioned as an electromechanical lock. Should a nefarious-minded criminal (is there any other kind?) make their way inside the base, they could not raise the lifts without providing external power and plugging in a separate control unit. 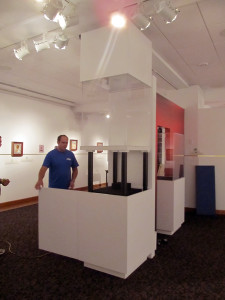 The case construction went as planned, with the exception of a complication with the glass. We attempted to add a low-reflectivity coating to the security glass, but the results were disappointing; we reverted to uncoated glass. I was most concerned about vibration from the lifts, but that was not a problem. They were buttery smooth, causing no perceptible vibration of the plinth at all. Installation of the egg and other Fabergé artifacts was problem-free. The exhibition itself was very successful, and received the Southeastern Museum Conference Exhibition Award. Our dataloggers demonstrated that we hit our climate targets, not surprising since the exhibition was held in an ASHRAE Class AA facility with tight temperature and humidity controls. I would be interested to see how the case would perform in a more varied environment, though I hope it never gets the chance.